I needed a hexagonal part with a round hole in the middle.   This would seem to be a challenge for ZBrush requiring an outside modeler.   However, it is actually pretty easy in ZB if you know primitives and deformers.

First, we can start with our old friend the cylinder primitive: 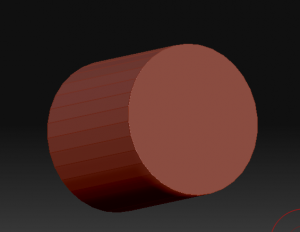 Not very hexagonal yet, and too long, but we can fix that.  We tweak the number of sides to 6 and shorten the z-length in the “initialize” menu:

Better, but no hole . . . We can solve that by setting the “inner radius”:

Nuts, close, but the inside whole isn’t round.   I’ll need to fix that up before the boss sees it.   I go ahead and make this a poly mesh and then group the inside polygons.  I also divide the polymesh a few times (well, 3 actually) with the “SMT” option off (so that it doesn’t round off my hexagonal prism).  Showing just the inside polygons (with display-double on for ease of viewing, I have: 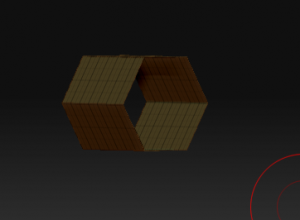 Now if there was a easy way to round those off, I’d be home free.   Hey, what about that “deformations” subpallet? 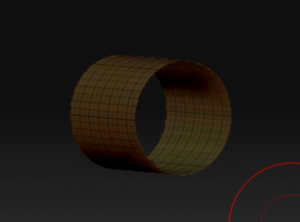 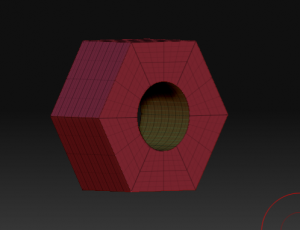