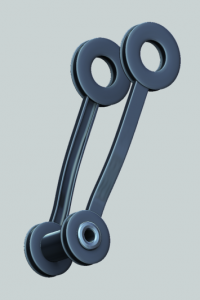 This isn’t really a Zbrush tip, per se, but I’m often surprised by frustrated modelers when they hit a wall saying, “This is way too complex!”   What they sometimes have failed to notice, in the pursuit of efficient modeling is that complex machines are often built out of assemblies which are made of subassemblies which are made up of even smaller sub-assemblies and ultimately out of individual (often cast) parts.   Observation of existing machines (and even disassembling a few) can improve your mechanical modeling.   To approach this piece of a leg, I didn’t start with the whole piece.  Instead, I recognized the sides were (at least in my concept sketch) just a mirrored pair of simple subassemblies.   A couple of cylinders and box (suitable beveled by masking and inflating.

Thanks to subtools, I only had to make one cylinder and one box which makes the basic strut

Since I don’t plan to take this apart, I went ahead and merged these into a single tool–if I thought I would need to edit the diameters of the cylinders or something, I might have left these in pieces to adjust them.   (I do bend them, but fortunately I don’t need them in pieces for that.   To build up more of my machine part, I then take two of the assemblies plus a hollow cylinder to build up my next subassembly. 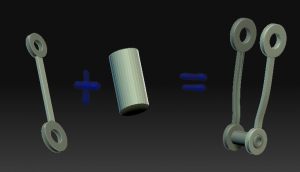 I haven’t built out some super machine with this yet (it will probably be the shin of some mechanical dinosaur when I’m done with it) but you get the idea–work with bite-sized parts and pretty quickly you can get some complex machinery (even without sophisticated texturing.)   This whole mechanical part was really created with just 3 simple forms, suitably scaled, deformed, and positioned.