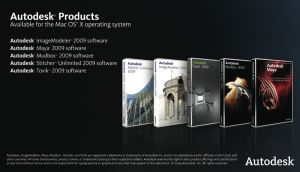 While Pixologic was busy pissing off its customers today, Autodesk has been sneaking up on them.

The big news for sculptors at Macworld:  Autodesk Mudbox 2009 is coming to the Mac!   No details yet, but published in Architosh:  “While some products were previously announced for the Mac today Autodesk is unveiling Mac OS X support for Autodesk Mudbox 2009, Autodesk Toxik 2009, and Autodesk ImageModeler 2009 for the first time.”

You can bet that I’ll be shelling out the dough for Mudbox when available and will try to get a Mac first-look here as shortly thereafter.

From the press release.  Expected ETA is February this year.

“Autodesk Mudbox 2009: A highly intuitive application for painting, texturing and re-touching 3D models. Mudbox software gives 3D modelers, artists and designers the freedom to create without worrying about the technical details. Breaking the mold of traditional 3D modeling applications, Mudbox 2009 provides an organic brush-based 3D modeling and texture painting experience that ignites the creative process. Mudbox 2009 for Mac OS X is expected to be available in English in February 2009. Autodesk suggested retail pricing for Mudbox 2009 is expected to be $745 USD*.”