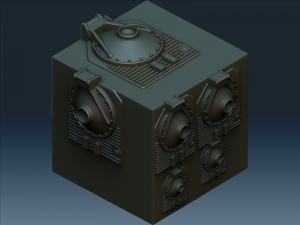 For years, model makers, whether working in the real or 3D world have known one secret to making things look realistic is often to add small details that represent the mechanical surface of the machine in question.   To speed things up, especially in the days when we worked in styrene instead of bits, small pre-made casts of mechanical “bits”, referred to as nurnies or greebles were glued to objects to make that object look “real.”   It’s a convincing illusion, even with the simplest model.   In this example, I’ve taken the simplest model I could think of, a straight edged cube.    For a real project, I would mix in six or seven nurnie types to increase the complexity of the surface, but for this example, I just used one, a hatch and varied its size.   Zbrush has a fast way to do this–it’s called the Mesh Insert brush.

The Mesh Insert brush allows you to pick another model and just stick it to the surface of the model.   The “Brush Mod” slider controls how deep the object will be placed on the surface.   (I often slide it up around +40 to +60 so that the nurnie generally riding right on the surface.

The main point of nurnies is to save time, so you may want model for yourself a few Lego-like pieces to stick onto your next project.   I have a library of few hundred in various resolutions I’ve kept handy for my projects.  🙂

If you really want to save yourself time, Meshweaver Productions make two very extensive collections. For £82.48 GBP (about $125 USD), you can have hundreds (about 550, each rendered in multiple resolutions) of detailed nurnies in your library which represent hundred of hours of saved work.  The hatch I used is from their second collection of  of parts, many based on tank pieces.  (I don’t take compensation on this blog–I bought these myself and really, really like this product.)

If you look back at part 5 of this series on Zbrush Mechanical, you’ll quickly be able to make fast alphas from your nurnies as well, expanding the possibilities for high quality detailing of your mechanical projects.

If you’re serious about mechanical modeling and surfacing, you owe it yourself to learn about nurnies and start collect your own parts for nurnification.